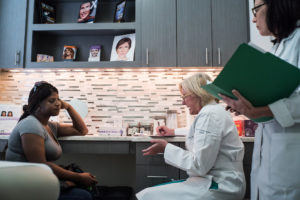 A former aerospace engineer who made a midlife career switch, Dr. Rumer said she had been exposed to transgender patients during her fellowship training, and came to empathize with them as a population underserved, even shunned, by medicine in the past.

She started performing transition-related surgery a decade ago, and now does about 100 transgender “bottom surgeries” a year — as well as breast augmentation, chest masculinization and facial feminization.

Most of her patients, like Ms. Nimmons, travel from out of town, and she rents rooms on her third floor — she lives on the second floor, above her office — to those who need a place to stay during the post-surgical recovery period.

When the new rules took effect, however, Amida Care, like other health plans, had no providers who specialized in male-to-female vaginoplasties. So it executed a “single-case agreement” with Dr. Rumer for Ms. Nimmons. Though it counts some 400 transgender people among its 6,000 members, she was the first to request and be approved for gender reassignment surgery.

In fact, by Oct. 1, New York Medicaid, which had paid for a total of 18 surgical procedures for people with gender dysphoria, had yet to pay for a single genital reconstruction.

This is partly because many Medicaid clients, who just began getting medically supervised health care for their transition, are not yet equipped to document their gender dysphoria in order to qualify for surgery, should they want it.

They need to have undergone hormone therapy for at least 12 continuous months, and to have lived full time in their gender identity during that period. They also need to furnish two referral letters from mental health professionals.

During her journey to Philadelphia, Ms. Nimmons kept removing her letters from her purse and reading aloud the line, “It would be in Ms. Nimmons’s best interest to have G.R.S. to complete her transition process.” (G.R.S. refers to gender reassignment surgery.)

“A lot of girls would kill to have these letters,” she said.

“I’ve never had no lady look between my legs before,” she said.

She had learned during her examination that she needed to push back her surgery until the fall so that her orchiectomy scars would be fully healed. This came as something of a relief, she said, because it would give her more time to be mentally prepared.

In the taxi back to the train station, she talked loudly on her cellphone. “Yeah, the doctor said she needs my scrotum sac to be healed better from the castration before she does the sex change,” she said.

The driver swiveled his head to look at his passenger, who batted her long false lashes, and he nearly drove off the road.